Consider a sentence given below. As humans, when we encounter the word “apple”, we could: 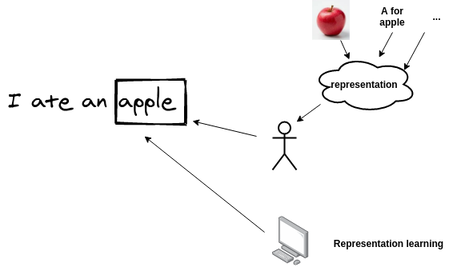 The basic premise of the latest developments in NLP is to give machines the ability to learn such representations.

In 2018, Google released BERT that attempted to learn representations based on a few novel ideas:

Language modeling involves predicting the word given its context as a way to learn representation. Traditionally, this involved predicting the next word in the sentence when given previous words.

BERT instead used a masked language model objective, in which we randomly mask words in document and try to predict them based on surrounding context.

The idea with “Next Sentence Prediction” is to detect whether two sentences are coherent when placed one after another or not.

For this, consecutive sentences from the training data are used as a positive example. For a negative example, some sentence is taken and a random sentence from another document is placed next to it. BERT model is trained on this task to identify if two sentences can occur next to each other.

To solve the above two tasks, BERT uses stacked layers of transformer blocks as encoders. Word vectors are passed through the layers to capture the meaning and yield a vector of size 768 for the base model.

Jay Alammar has an excellent post that illustrates the internals of transformers in more depth.

BERT, when released, yielded state of art results on many NLP tasks on leaderboards. But, the model was very large which resulted in some issues. The “ALBERT” paper highlights these issues in two categories:

From BERT to ALBERT

ALBERT attacks these problems by building upon on BERT with a few novel ideas:

ALBERT marks an important step towards building language models that not only get SOTA on the leaderboards but are also feasible for real-world applications.