Though the analogy is debated, we have seen the impact of self-supervised learning in the Natural Language Processing field where recent developments (Word2Vec, Glove, ELMO, BERT) have embraced self-supervision and achieved state of the art results. 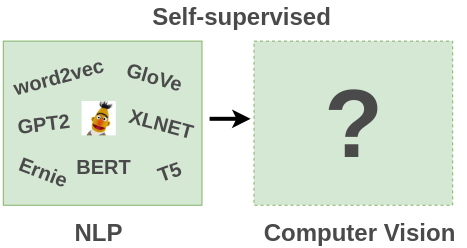 To apply supervised learning with deep neural networks, we need enough labeled data. To acquire that, human annotators manually label data which is both a time consuming and expensive process. There are also fields such as the medical field where getting enough data is a challenge itself. Thus, a major bottleneck in current supervised learning paradigm is the label generation part.

What is Self-Supervised Learning?

Can we design the task in such a way that we can generate virtually unlimited labels from our existing images and use that to learn the representations? 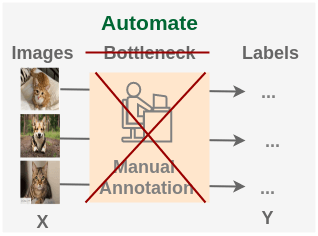 In self-supervised learning, we replace the human annotation block by creatively exploiting some property of data to set up a pseudo-supervised task. For example, here instead of labeling images as cat/dog, we could instead rotate them by 0/90/180/270 degrees and train a model to predict rotation. We can generate virtually unlimited training data from millions of images we have freely available on the internet.

Once we learn representations from these millions of images, we can use transfer learning to fine-tune it on some supervised task like image classification of cats vs dogs with very few examples.

A. Self-Supervised Learning from Image

What if we prepared pairs of (grayscale, colorized) images by applying grayscale to millions of images we have freely available?

We could use an encoder-decoder architecture based on a fully convolutional neural network and compute the L2 loss between the predicted and actual color images.

To solve this task, the model has to learn about different objects present in the image and related parts so that it can paint those parts in the same color. Thus, representations learned are useful for downstream tasks.

What if we prepared training pairs of (small, upscaled) images by downsampling millions of images we have freely available? 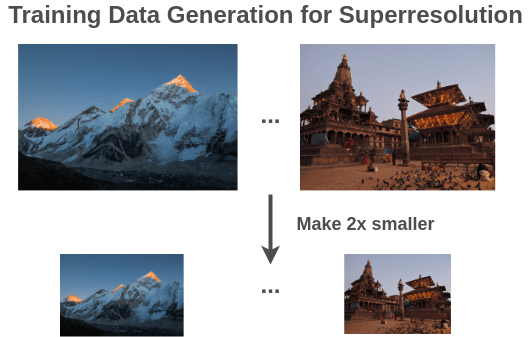 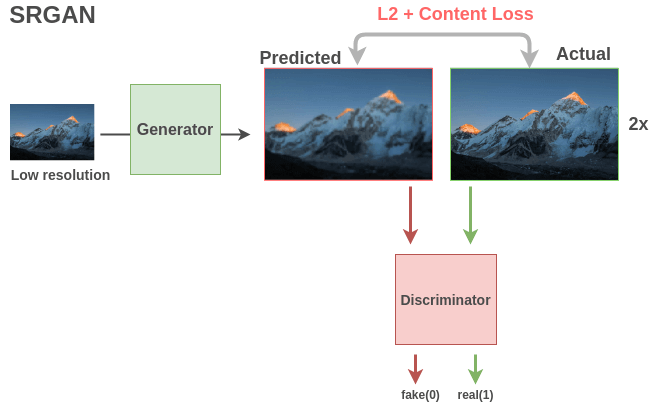 Both generator and discriminator learn semantic features that can be used for downstream tasks.

What if we prepared training pairs of (corrupted, fixed) images by randomly removing part of images? 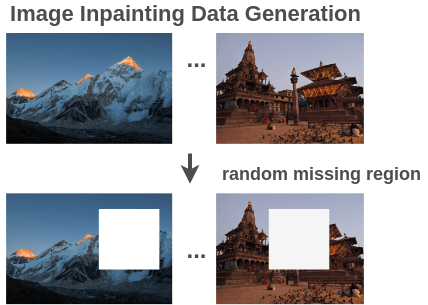 Similar to superresolution, we can leverage a GAN-based architecture where the Generator can learn to reconstruct the image while discriminator separates real and generated images. 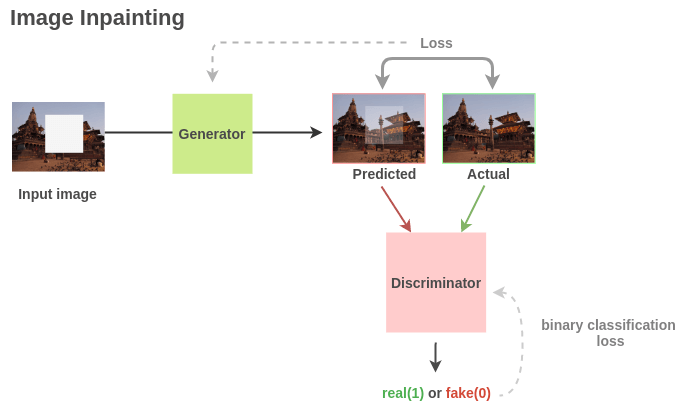 For downstream tasks, Pathak et al. have shown that semantic features learned by such a generator give 10.2% improvement over random initialization on the PASCAL VOC 2012 semantic segmentation challenge while giving <4% improvements over classification and object detection.

What if we predict one channel of the image from the other channel and combine them to reconstruct the original image?

Zhang et al. used this idea in their paper called “Split-Brain Autoencoder”. To understand the idea of the paper, let’s take an example of a color image of tomato. 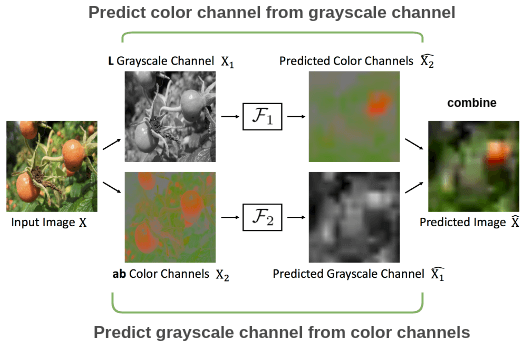 This same setup can be applied for images with depth as well where we use the color channels and the depth channels from a RGB-HHA image to predict each other and compare output image and original image. 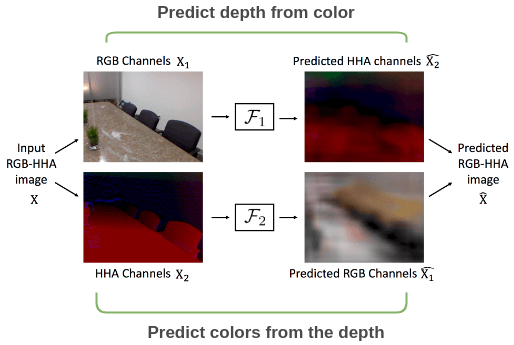 What if we prepared training pairs of (shuffled, ordered) puzzles by randomly shuffling patches of images?

Even with only 9 patches, there can be 362880 possible puzzles. To overcome this, only a subset of possible permutations is used such as 64 permutations with the highest hamming distance.

Suppose we use a permutation that changes the image as shown below. Let’s use the permutation number 64 from our total available 64 permutations.

Now, to recover back the original patches, Noroozi et al. proposed a neural network called context-free network (CFN) as shown below. Here, the individual patches are passed through the same siamese convolutional layers that have shared weights. Then, the features are combined in a fully-connected layer. In the output, the model has to predict which permutation was used from the 64 possible classes. If we know the permutation, we can solve the puzzle. 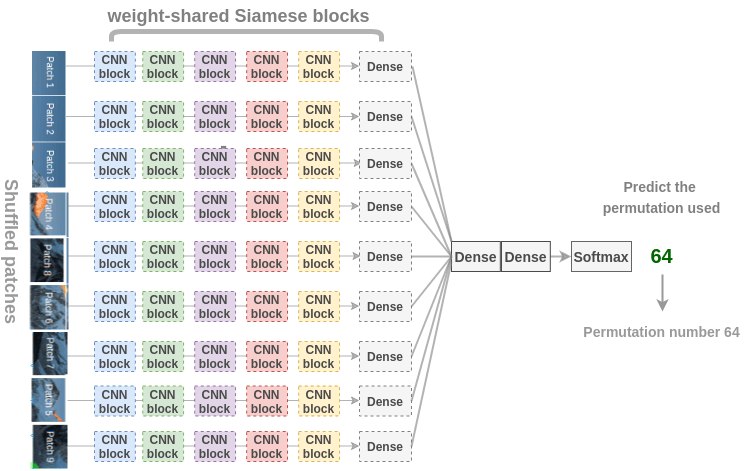 To solve the Jigsaw puzzle, the model needs to learn to identify how parts are assembled in an object, relative positions of different parts of objects and shape of objects. Thus, the representations are useful for downstream tasks in classification and detection.

What if we prepared training pairs of (image-patch, neighbor) by randomly taking an image patch and one of its neighbors around it from large, unlabeled image collection? 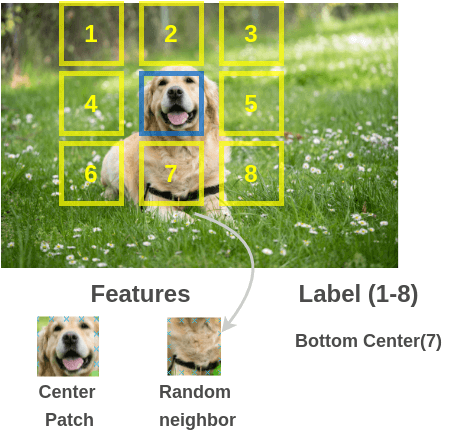 To solve this pre-text task, Doersch et al. used an architecture similar to that of a jigsaw puzzle. We pass the patches through two siamese ConvNets to extract features, concatenate the features and do a classification over 8 classes denoting the 8 possible neighbor positions.

What if we prepared training pairs of (rotated-image, rotation-angle) by randomly rotating images by (0, 90, 180, 270) from large, unlabeled image collection? 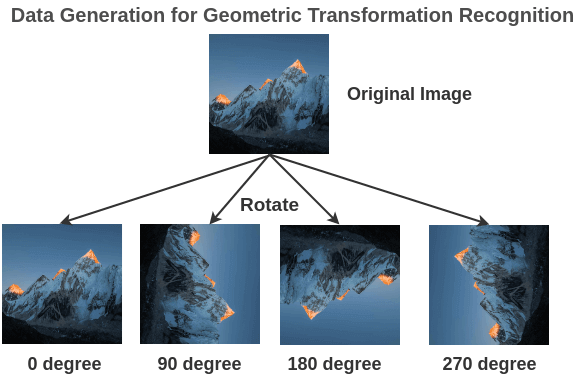 To solve this pre-text task, Gidaris et al. propose an architecture where a rotated image is passed through a ConvNet and the network has to classify it into 4 classes(0/90/270/360 degrees).

Though a very simple idea, the model has to understand location, types and pose of objects in an image to solve this task and as such, the representations learned are useful for downstream tasks.

What if we prepared training pairs of (image, cluster-number) by performing clustering on large, unlabeled image collection? 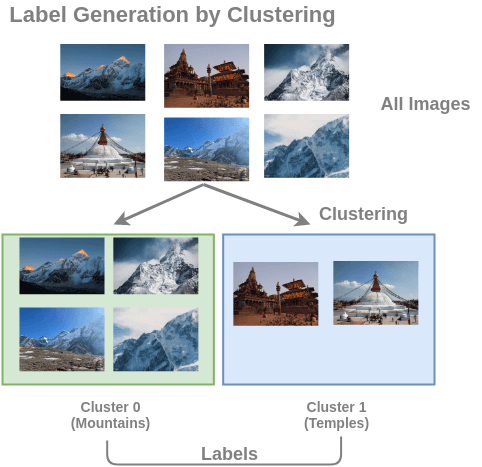 To solve this pre-text task, Caron et al. propose an architecture called deep clustering. Here, the images are first clustered and the clusters are used as classes. The task of the ConvNet is to predict the cluster label for an input image.

What if we prepared training pairs of (image, properties) by generating synthetic images using game engines and adapting it to real images?

To solve this pre-text task, Ren et al. propose an architecture where weight-shared ConvNets are trained on both synthetic and real images and then a discriminator learns to classify whether ConvNet features fed to it is of a synthetic image or a real image. Due to adversarial nature, the shared representations between real and synthetic images get better. 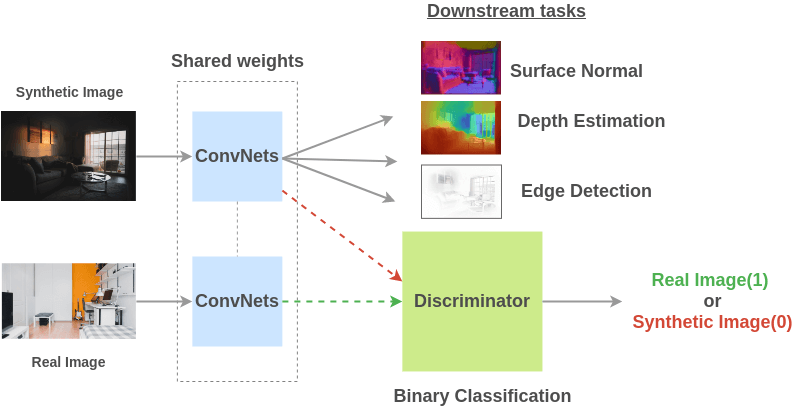 B. Self-Supervised Learning From Video

What if we prepared training pairs of (video frames, correct/incorrect order) by shuffling frames from videos of objects in motion?

To solve this pre-text task, Misra et al. propose an architecture where video frames are passed through weight-shared ConvNets and the model has to figure out whether the frames are in the correct order or not. In doing so, the model learns not just spatial features but also takes into account temporal features. 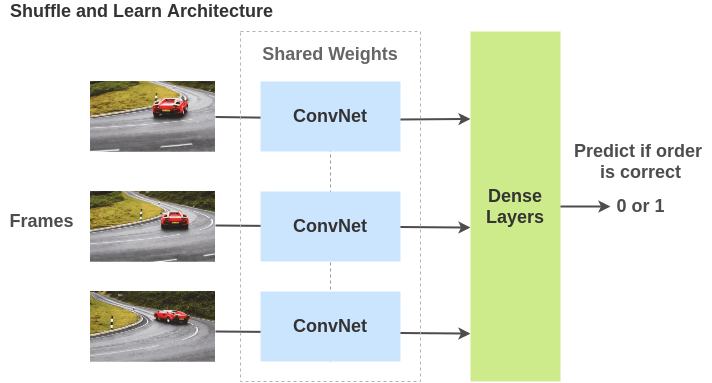